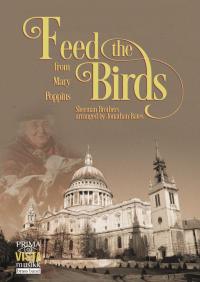 For Soprano Cornet and Brass Band

Feed the Birds was commissioned by Paul Holland and the Flowers Band, and received its world premiere at the 2016 Brass in Concert Championships at The Sage, Gateshead - with Paul Richards receiving the award for 'Best Soprano Cornet'. Feed the Birds is a song written by the Sherman brothers and featured in the 1964 motion picture 'Mary Poppins'. The song speaks of an old beggar woman (the "Bird Woman") who sits on the steps of St Paul's Cathedral, selling bags of breadcrumbs to passers-by for tuppence a bag so that they can feed the many pigeons that surround the woman. The scene is reminiscent of the real-life seed vendors of Trafalgar Square, who began selling birdseed to passers-by shortly after its public opening in 1844.