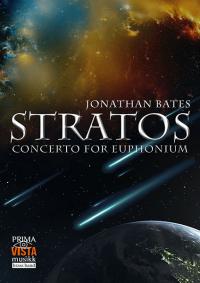 For Euphonium and Brass Band

Stratos (Concerto for Euphonium) was composed for the euphonium virtuoso David Childs, and is featured on the Flowers Brass Band CD Stratos, featuring all new works by Jonathan Bates.

‍
I - Charge of the Intergalactic Rocks

Unpredictable in nature, this opening movement fizzes along through varying keys, styles, time signatures and many sudden changes of both volume and timbre. A large senza misura cadenza for the euphonium, accompanied by snare drum playing in time, forms the central focal point of the movement, where many of the motifs used throughout the movement are introduced primarily, or revisited in a new guise. This movement relies mostly on rhythmic and textural variety, rather than the melodic and harmonic nature of the latter movements.

A calm and desolate setting forms the core of the second movement. The music aims to capture the view over the Earth from outer space, the silent beauty of the curvature of the planet and the sun beaming from behind.

The rip-roaring finale showcases the soloist's flair and rhythm with a driving pulse from the first note to the last, climaxing in a grand reprise of the first movement. An opening theme played in the solo line, which is then repeated through several instruments, forms the backbone of the movement as it is developed and changed from new ideas and textures.